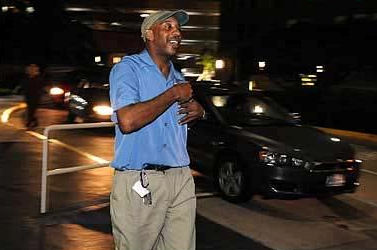 TAMPA - His name is Michael Leslie, but everyone knows him as Jack. Smilin' Jack. He got hired at Tampa General Hospital 23 years ago, worked in the printing department four years. Then his boss said, "Jack, you need to be on the outside. You're too much of a people person to be boxed in here."

The boss was right.

From that time forward, Jack became a valet at Tampa's busiest medical center. His is the first face most patients and staff see when they pull up to the main entrance, Monday through Friday, 5 a.m. to 1 p.m. He can be counted on.

Never called in sick in all his years at the hospital.

"You see him, and you know things will be all right," says Winn Ellenwood, a heart transplant patient from Palm Harbor. "You get a big smile, a hug and a slap on the back. You can't feel bad when you're with Jack."

It's the genuine thing, this aura of happiness.

In a world tainted by a barrage of bad news and depressed people hooked on Prozac and sleeping aids, Jack oozes sunshine. He can't wait to get out of bed and embrace each new day.

That happy hustle and bustle isn't reserved just for work. He's the same at home in Valrico, where he lives with Pamela, his wife of 28 years and mother of their three grown children. She's the first girl he kissed, the first girl he ever loved. They buy and rent out property as a side business. They help minister at faith-based marriage seminars and lead community outreach training programs aimed at getting young single mothers off welfare.

He credits his daddy for teaching him a lesson that has stayed with him for all his 51 years.

"You can find good in anything, if you look hard enough," Jack says. "Nothing is so bad that you can't find the good in it."

That's a Swedish term for making the most of every moment.

"It's the contrast between the value of being happy with just enough as opposed to the value that more is better," says the Hyde Park family psychologist.

He doesn't know Jack. But he knows the type.

"Someone who finds his happiness in connecting with others. Someone who has inner peace because he's happy with what he has," Evans says. "It's not about having more stuff and striving to be perfect and outstanding. There's a lot of pressure in that."

Evans says we're all ordinary people doing extraordinary things. Only some don't see it that way. They're too busy looking ahead, wanting more, seeking a success defined by external things.

A person like Jack knows he counts and knows he belongs. He's comfortable with his place in life, Evans says. And because he feels good about himself, he puts people at ease and makes them feel good, too.

Nicole Coulter is part of the stream of Tampa General employees who arrive at work in the pre-dawn darkness. For years, she has gotten a kiss from Jack to start the day. She brings him Tootsie pops. He makes her laugh. It's a nice trade-off.

"I get my buzz from V8," says Coulter, holding up a can of the beverage, "and Jack. He's one of the friendliest guys you'll ever meet. If you're in a bad mood, it all goes away."

It starts with a foundation. For Jack, that was family.

He was the youngest of 10 children born to Jack and Lessie Leslie of Port St. Joe. Back then, the Panhandle town didn't even have a movie theater or restaurant. You had to drive 30 miles to Panama City for some action.

His parents still live in the three-bedroom, one-bath house where they raised their family. The elder Jack, now 91, puts in three hours a day, no more and no less, working on the house.

There wasn't much money. Daddy Jack made 28 cents an hour at his first job in Alabama. When he moved to North Florida to work at the paper mill, he got a 5-cent raise. That was a big deal.

They didn't have much. Jack had but two shirts and two pairs of pants to wear to school. Even though money was always tight, the father made it clear: Never borrow from another man. But financial institutions were a different matter. He would take out loans from the credit union and deposit the money in a bank, where he earned higher interest. Then he'd pay off the loan and come out ahead.

He didn't just tell his kids to go to church. He walked them there. On Sundays, the family attended Zion Fair Baptist Church, where Daddy Jack still serves as Sunday school superintendent.

"He set the example for us, how to live our lives," Jack recalls of his father, though the influence wasn't readily evident in Jack the young man.

His older sister Beverly Daniels remembers her brother as a bit of a troublemaker who got a lot of passes because he was the baby.

Mother Lessie, now 89, taught him how to cook, so he wouldn't have to depend on a woman to feed him. To this day, Jack fixes dinner and handles all the holiday meals from scratch.

Five years apart in age, Jack and Pamela grew up in Port St. Joe and attended the same elementary school. Everybody knew Jack because of his red hair. They called him Vida Red after baseball player Vida Blue.

When Pamela was about 12, she walked into a friend's house, where Jack and a buddy were visiting. Jack turned to his friend. "That's her," he said.

The two didn't even speak for a few years. When they finally did start dating, they got themselves in a spot of trouble. Pamela got pregnant.

She wanted to finish high school first. They waited till she graduated, then got married, toasting each other with grape Kool-Aid at their wedding. She would graduate first in her class at Florida A&M University with a six-year degree in pharmacy.

Finding Pamela was one of Jack's life-defining moments. The other came in 1980, when he attended a revival. All the church services he'd attended as a child suddenly clicked into place.

His sister Beverly remembers his excitement when he announced, "Sis, I got saved!" From then on, she says, Jack was a changed man.

He and Pamela moved to Tampa when Tampa General hired her. She's the professional, with a career that has included clinical research, public health and starting a pharmacy staffing company. She runs a community outreach program that trains young women for the pharmacy technician field, to help wean them from government assistance and into independence.

Jack is the valet. She's proud of the work he does.

"He's not fancy. He's faithful," she says of her husband. "He's the salt of the earth."

They have three children: Michael, 29, a musician-producer in Los Angeles; Myron, 26, Triple A baseball player in Texas for the Oakland Athletics; and Patrice, 19, an international business major at Florida International University in Miami.

Patrice admits she used to be a little embarrassed about her dad's job. Then she visited him at the hospital one day and saw the happiness he brought to the people he helped. She saw the dance in his step. She knew then he was right where he was supposed to be.

"I'm so lucky," she says. "He's instilled so much in all of our lives. I had the cool dad growing up, the one who was always there for us and made everyone around him feel good. He's still the cool dad."

Here's how Jack begins every day.

With his arms still wrapped around his wife, before he puts his feet on the floor, he gives a prayer of gratitude.

He has the countenance of an evangelist, but no desire to lead a church. His congregation is the world; his pulpit is wherever he goes. That joy he found so many years ago keeps him juiced.

Jack is generous with affection and words of comfort. He thinks of himself as an ambassador of hope in a place where people need it the most.

"When doctors say, 'There's nothing else we can do,' I know there is still something that can be done," he insists. "And it's through prayer."

In all the years he's offered to pray with a patient or employee, no one has refused him.

He's a happy man. He believes there's a bright side to everything, even if it doesn't seem that way at first. Look hard and it will be there, he promises.

"Most of the stuff going on, we can't control. It's out of our hands," Jack says. "Start with your inner peace. What goes on inside will show on the outside."